As I have mentioned in earlier posts, I had been recently preparing for Carleton University’s first ever Data Day. This day was focused on displaying attention to the work of Carleton Student’s who have done recent work in the data sciences. This day also included a panel discussion of experts, who discussed the subject of data sciences and what role they will play in the upcoming years.

One of the comments from the panel that struck me particularly was from one Joe Armstrong, a regional business leader at CAE IES Canada, who said that the 21st Century will be the when the world’s statistical problems are resolved. This will be done thanks to technology that allows us to study data in a more precise fashion. Going on to say that Google was taking the lead in this process.

Taking this into consideration, the poster competition was a intellectually stimulating event. There were a vast array of projects from a number of fields of study, from the health sciences to geology. Mine however, stood alone representing the humanities, perhaps being best described by the poster judge when he said, “this one is like comparing apples to oranges”. Nonetheless it still received a great deal of attention from the attendees (see photo below of me explaining the project to fellow attendees). This made me feel confident that despite being the only humanities project, by the only undergraduate student at the event, it provided an equal level of value along with the rest. 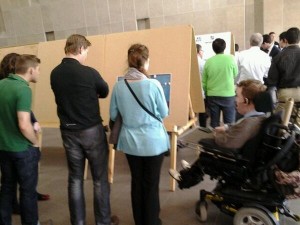 After attending this day and seeing all the projects, I must agree with the panelists and speakers on the fact that the most important thing for the data sciences moving forward is for all fields to collaborate together. Whether you are an engineer or a historian all data studied needs to be valued equally.